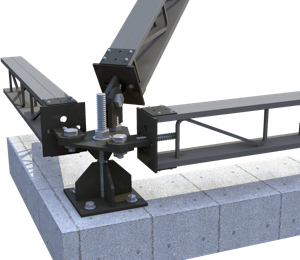 Description of the CRJ node

The CRJ - Corner Roof Joint - is made up of six articulated elements. The element A is formed by the support plate and a bolt that connects the plates A and B; the element B is the plate to which the elements C / C1, C2, and C3 are connected, which are used to join the beams of the covering, be they the perimeter ones or the struts. The CRJ allows the rotation of the perimeter roof beams in the XY plane while the strut can rotate in the vertical plane.

The results were obtained with a non-linear analysis of the stress / strain state and of the displacement / deformation behavior, performed with a finite element calculation program for incremental load values. The characteristics of the materials are as follows: S355 steel plates; high strength screws and bolts 8.8. The results of the tests carried out refer to the action of three forces (F1 / F2 / F3) for four distinct inclinations (a) of the node, arbitrarily chosen; the angle of rotation of the joint is α = 15 °, 30 °, 45 ° and 60 °. The compressive forces (F1 / F2) and the tensile forces (F3) reach the following stress values:

Where: Se = Max stress at the elastic limit.

Ss = Max stress at the complete plasticization of the resistant section.